Purpose
The regional averages are used to document climate variability and climate change in Germany and the federal states. They are determined for the period since the beginning of systematic observations. 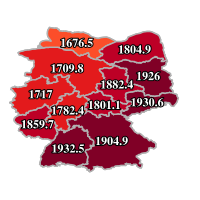